How to fix the empty SpecFlow HTML report problem with vstest.console.exe

There are multiple ways to run an MsTest test suite from the command line. The older, now deprecated tool is mstest.exe. It executes the test suite and produces an output in an XML-based format called TRX.
Other tools, including the SpecFlow HTML report generation build upon that TRX format.

The newer, current way to execute the unit tests in a project is vstest.console.exe. This new tool has a pluggable logging system, it supports specifying different “loggers”, which can produce different outputs.
One of the built-in loggers is called trx, which is supposed to produce the output in the same format as mstest.exe did.

The problem with this TRX logger is that it produces a slightly different output than mstest.exe, which beaks the SpecFlow report generation. If you try to generate an HTML report from the new TRX file, the report will be empty, all the test names and descriptions will be missing. 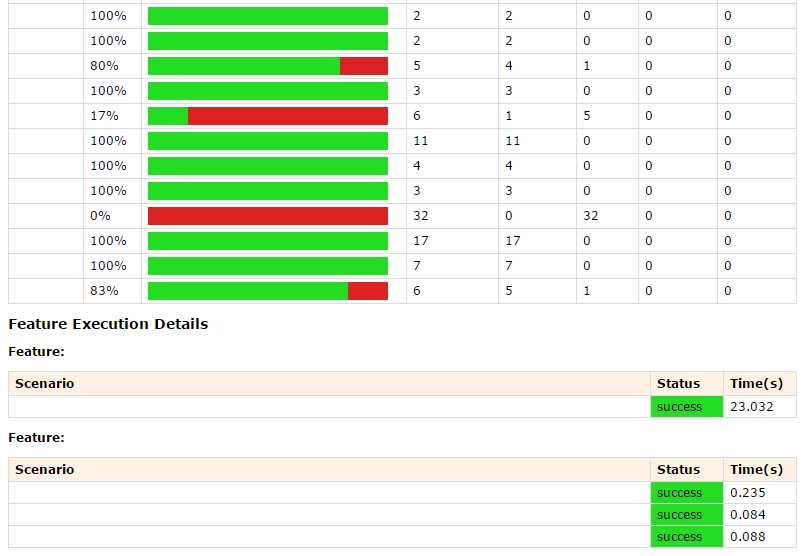 The issue was discussed in the a GitHub issue in the SpecFlow repository. Paul Rohorzka identified the differences between the two TRX outputs causing the problems with the report:

1. //TestRun/TestDefinitions/UnitTest/TestMethod/@className renders not the fully qualified name, but just the namespace.
Effect for report generation: No relevant textual output at all

2. The TestDescriptionAttribute is not rendered, but should be in //TestRun/TestDefinitions/UnitTest/Description.
Effect for report generation: No scenario titles

3. TestPropertyAttributes are not rendered, but should be in //TestRun/TestDefinitions/UnitTest/Properties.
Effect for report generation: No feature titles

Luckily thanks to the pluggable nature of the vstest.console.exe logging, it’s possible to hook in a custom Logger implementation when executing the test suite.

In order to do this we need to implement the interface Microsoft.VisualStudio.TestPlatform.ObjectModel.Client.ITestLogger, where we can implement our fully custom code generating the output (instructions to get started can be found here).

Then the compiled assembly should be copied into C:\Program Files (x86)\Microsoft Visual Studio 12.0\Common7\IDE\CommonExtensions\Microsoft\TestWindow\Extensions so that vstest.console.exe can pick it up.
The last thing to do is to specify that we want to use that particular logger. That can be done with the Logger parameter of the test runner. Example:

The name of the logger has to be equal to the value specified in the FriendlyName attribute on our implementation class.

I implemented a custom logger called MsTestTrxLogger in which I replicated to format of the old mstest.exe. I tried to make it generate an output as close to the original as possible, but I had to make some assumptions. A post by Dominic Hopton about TRX internals helped in filling in some of the details.

I uploaded the solution with instructions about how to use it to this GitHub repository.

It was an interesting experience to to reverse engineer the mstest.exe output and try to replicate that using the data model provided by Microsoft.VisualStudio.TestPlatform.ObjectModel, and it’s nice to see that with some tinkering we can fully customize the output of vstest.console.exe.

So far it’s working perfectly with the SpecFlow report of a test suite containing ~300 tests. However, due to the assumptions I had to make, it might now work perfectly in every situation. So issue reports (or pull requests :)) are welcome if you find any problems.