Varnish is a widely used reverse proxy and HTTP accelerator. It sits in front of an HTTP service, and caches the responses to improve the response times observed by the clients, and possibly to reduce the load on the upstream backend service.

Besides bringing performance improvements, Varnish can be also useful for shielding the clients from any outage of the backend service, since if the upstream is temporarily out of service, Varnish can keep serving the cached content, so the clients don’t have to notice anything (if the data they need is already present in the cache).

In order to use the basic caching capability, and to also gracefully fall back when the backend is down, we have to control two properties of the response object.

If a request comes in for which the response is already in the cache, and the ttl has not passed yet, then Varnish returns the cached value to the client without trying to fetch a fresh one from the backend.

On the first request that comes after ttl expired, if grace is set and is not expired yet, then Varnish will immediately return the cached value to the client, and at the same time it will trigger a background fetch for a fresh response. If the fetch is successful, it replaces the stale object in the cache with the fresh one. 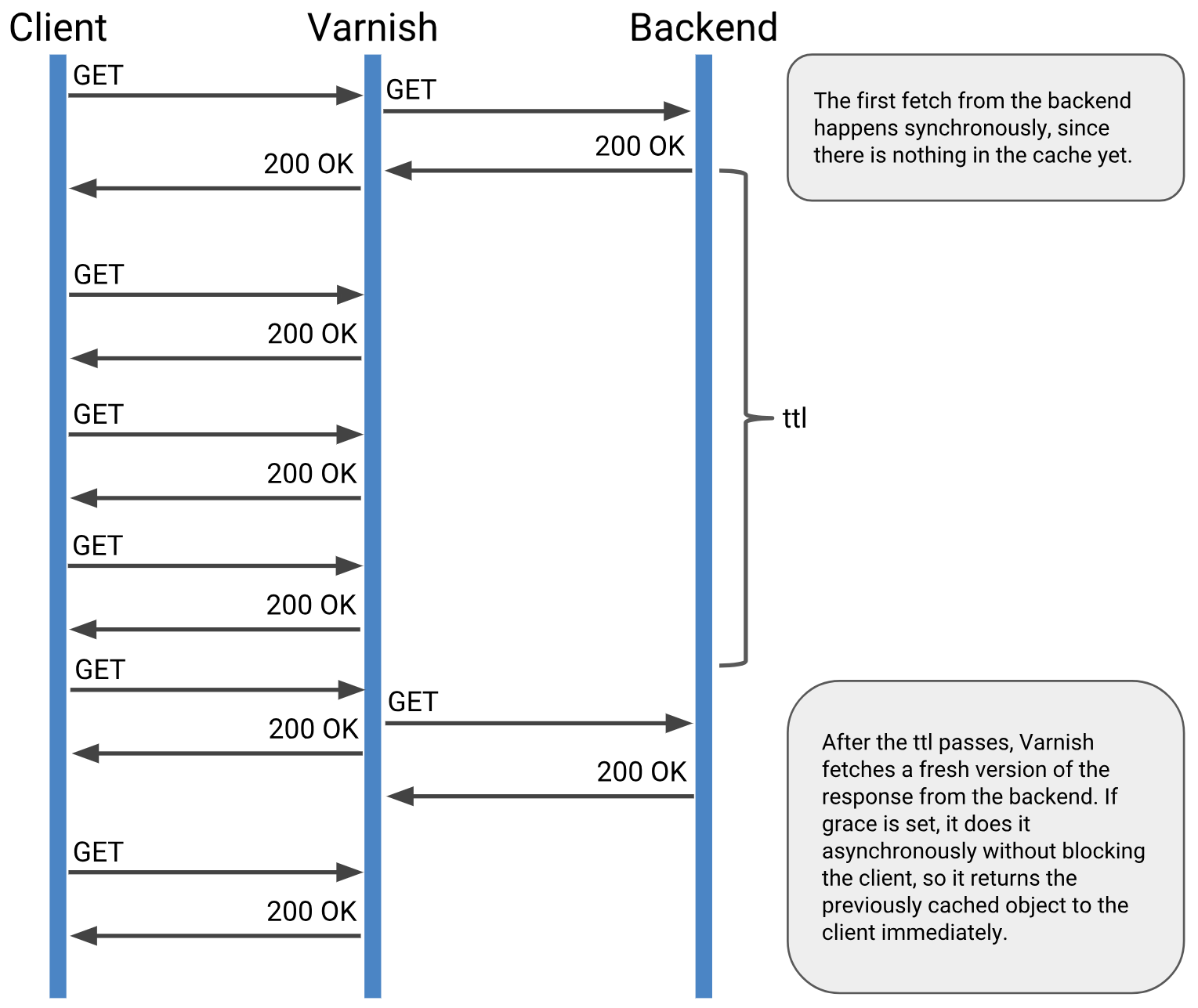 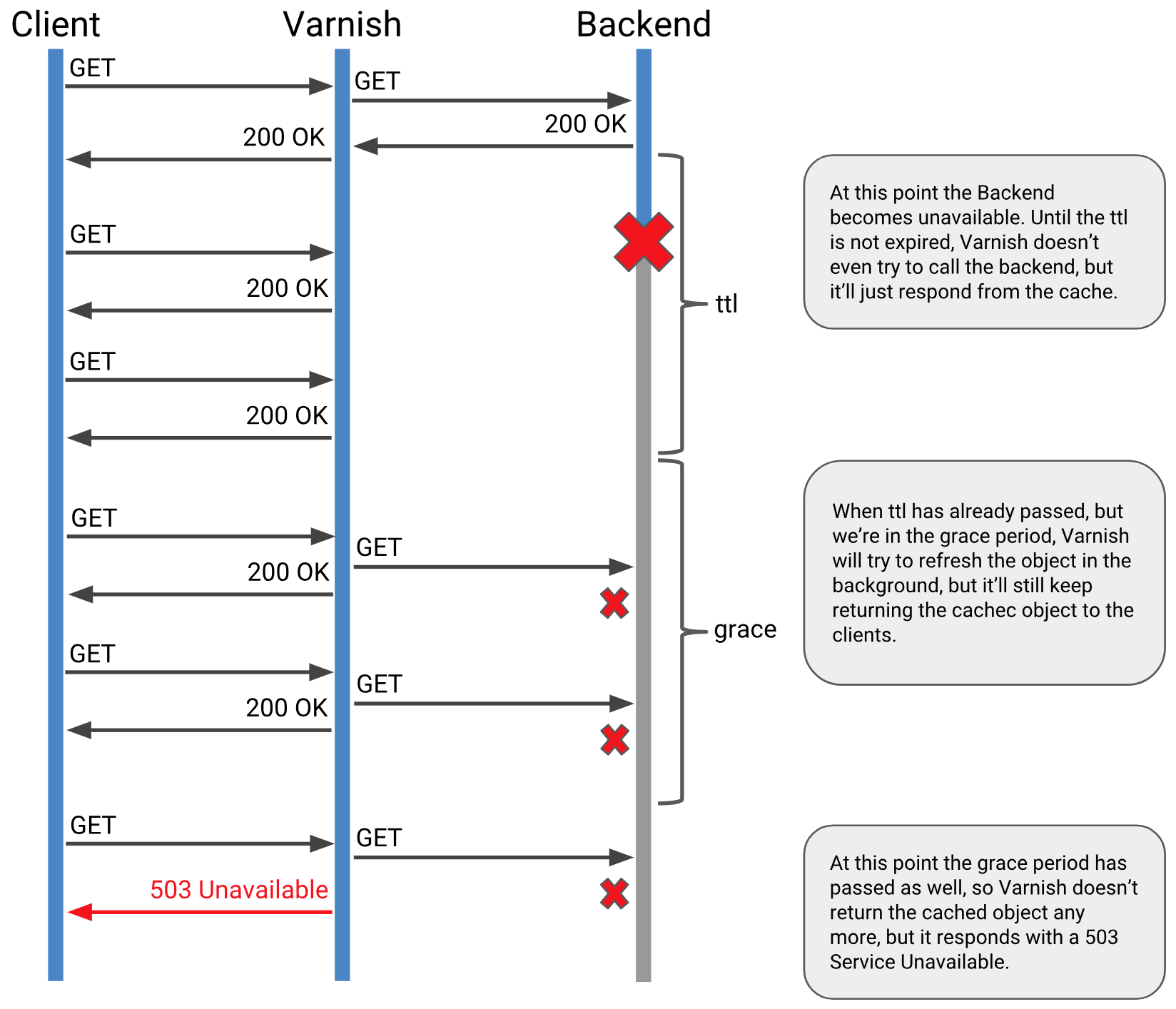 In practice, grace can be much longer than ttl. For example we can set ttl to a couple of minutes to make sure the clients regularly get fresh data, but we can set grace to multiple hours, to give us time to fix the backend in case of an outage.

By default Varnish only falls back to the cached values during the grace period if the backend can’t be connected to, or if the request times out. If the backend returns a 5xx error, Varnish considers that normal response, and returns it to the client (it might even store it in the cache, depending on our configuration).
This is an understandable default, it might be confusing if our clients did not receive some server errors which could contain valuable information about the problem with the backend.

On the other hand, we might also consider 5xx responses outages, and want to gracefully fall back to the cached values instead. I wanted to achieve the following objectives.

This can be achieved with Varnish pretty easily, but it needs some configuration.

In order to customize the behavior of Varnish, we have to edit its configuration file (which usually resides at /etc/varnish/default.vcl).

The config file is using the VCL syntax, which is a C-like domain specific language specifically for the customization of Varnish. It took me some getting used to before I could wrap my head around it, an actual production configuration can get complicated, which can be a bit intimidating at first. In this post I won’t talk about the basics, but will just rather show the bits necessary for this particular setup. If you’d like to learn the basics of VCL, I recommend reading a comprehensive guide, for example The Varnish Book.

In the VCL configuration we can customize various subroutines, with which we can hook into varios steps of the request lifecycle. The only subrouting we’re going to look at is sub vcl_backend_response, which is triggered right after a response was received from the backend.

A very simple version of this would be the following, which enables caching for 1 minute, and enables graceful fallback for 10 minutes on top of that.

In order to achieve the objective of gracefull fallback on 5xx errors, we’ll need to use the following additional tools.

With all these tools in our belt we can implement the requirements with the following logic.

In the above code I’m only handling the standard 500, 502, 503 and 504 codes, but of course you can extend it if your backend is returning something else.

The key of the solution is using abandon in combination with if (bereq.is_bgfetch). If we returned abandon on every 5xx without checking bereq.is_bgfetch, then Varnish would always return its built-in 503 response to the client instead of the 5xx sent by the backend, so our client could never see the actual backend errors.

Important: The field bereq.is_bgfetch is only available starting from Varnish 5.2.0. And depending on our OS version and installation method, we might be on an earlier version, so this is important to check with varnishd -V.

The configuration syntax of Varnish takes a bit of getting used to, but if set up properly, it provides an invaluable tool for improving the performance of our services, and meanwhile protecting our clients from outages. And I hope this post will be helpful when handling server side errors.